Polymer stabilizers are chemical additives which may be added to polymeric materials, such as plastics, to inhibit or retard their degradation.

The polymers degrade when exposed to heat, cold and UV-light. Specially designed stabilizers protect the polymer during processing and ensure the end products retain their physical properties during use, prolonging their life. The performance of a stabilizer is determined not only by its effectiveness in protecting the polymer against degradation, but also by its physical properties.

When polymers are exposed to shear stress, heat, light, air, water, radiation, or mechanical loading, chemical reactions may be initiated that lead to degradation of polymers. Polymer degradation is a change in the properties—tensile strength, color, shape, etc. These changes are usually undesirable, such as cracking, color fading and chemical disintegration of products.

Polymer degradation can generally be classified into two mechanisms: hydrolysis and oxidation.

1) Hydrolysis is thus defined as the reaction with water where the water molecules lead to cleavage of chemical bonds within a material.

For example, hydrolytic degradation of members of the polylactide/glycolide family proceeds through four stages as represented in Figure 2, First stage of water diffusion followed by second stage, in which oligomers with acidic end-groups autocatalyze the hydrolysis reaction. A critical molecular weight is reached at the beginning of third stage, and oligomers start to diffuse out from the polymer. Water molecules diffuse into the void created by the removal of the oligomers, which in turn encourages oligomers diffusion. Marked decrease in polymer mass and a sharp increase in the drug release rate occur during third stage as the drug diffuses from the porous regions. In fourth stage, polymeric matrix become highly porous and degradation proceeds homogeneously and more slowly.

Oxidative degradation can proceed according to two mechanisms, photooxidation and thermal oxidation.

Photooxidation is caused by the action of UV light in the presence of oxygen, and due to its limited penetration capability, it takes place only on the surface and subsurface layers of polymer.

Thermal oxidation, on the other hand, can extend throughout the material. It takes place as a result of the simultaneous interaction of oxygen with the polymer and high temperature. 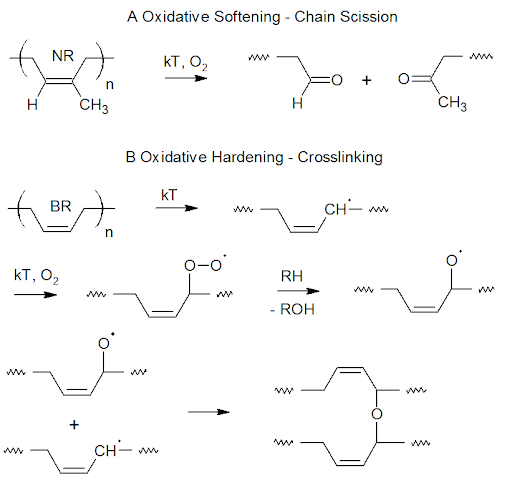 An antioxidant is a substance that at low concentrations delays or prevents oxidation of a substrate. Antioxidant compounds act through several chemical mechanisms, hydrogen atom transfer (HAT), single electron transfer (SET), and the ability to chelate transition metals. (see more)

Light stabilizers are a group of additives that have been developed to minimize or prevent the damage to polymers caused by exposure to the environmental parameters of light, heat and air. Light stabilizers act through several chemical mechanisms, light screener, UV absorber, quencher, free radical scavenger. (see more)

Flame retardants refer to a variety of substances that are added to combustible materials to prevent fires from starting or to slow the spread of fire and provide additional escape time. (see more)

Plasticizers are substances those are added to a material to make it softer and more flexible, to increase its plasticity, to decrease its viscosity, or to decrease friction during its handling in manufacture. (see more)

Heat stabilizers are used to prevent degradation of plastics by heat, especially during processing, but also in applications. Heat stabilizers act by stopping thermal oxidation or by attacking the decomposed products of oxidation. (see more)