An antioxidant is a substance that at low concentrations delays or prevents oxidation of a substrate. Antioxidants inhibit autoxidation that occurs when polymers react with atmospheric oxygen.

Oxidative degradation is usually initiated when polymer chains form radicals, either by hydrogen abstraction or by homolytic scission of a carbon-carbon bond. This can occur during manufacture, processing or during service when exposing the polymer to light or heat.

Oxidative degradation occurs gradually at room temperature, but almost all polymers are at risk of thermal oxidation when they are processed at high temperatures. The molding or casting of polymers require them to be above their melting point or glass transition temperature. Under these conditions reactions with oxygen occur much more rapidly. Once initiated, autoxidation can be autocatalytic. 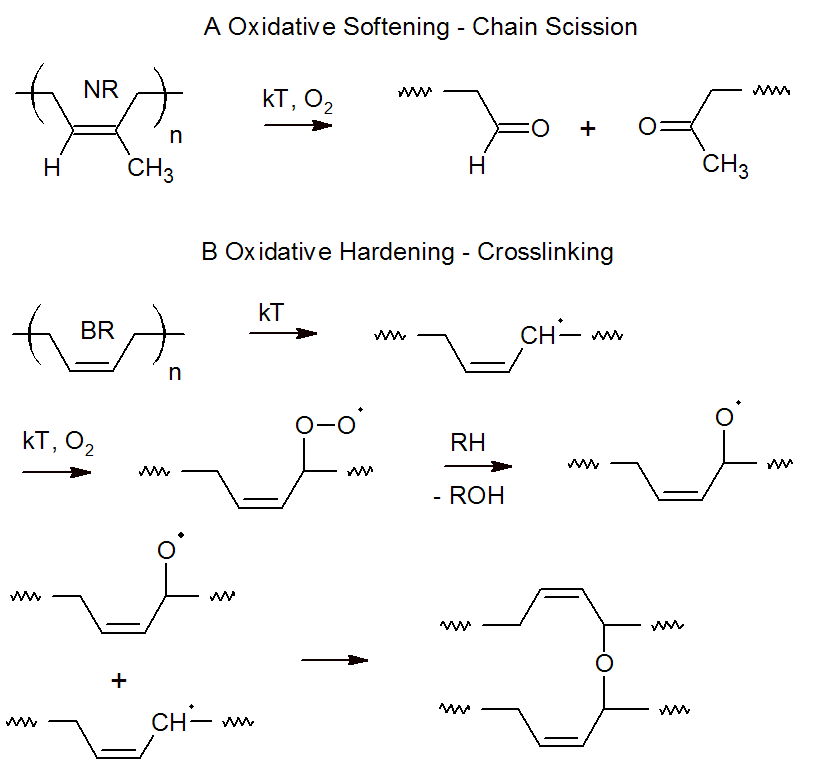 As the name suggests, free-radical scavengers react with chain-propagating radicals such as peroxy, alkoxy, and hydroxy radicals in a chain terminating reaction. To be more specific, these antioxidants donate hydrogen to the alkoxy and hydroxy radicals which converts them into inert alcohols and water respectively.

The most widely used primary antioxidants are sterically hindered phenols. They are very effective radical scanvengers during both processing and long-term thermal aging and are generally non-discoloring. Many also have received FDA approval. The mechanism of scavenging oxy radicals is shown below.

As the name suggests, peroxide scavengers (secondary antioxidants) decompose hydroperoxides (ROOH) into nonreactive products before they decompose into alkoxy and hydroxy radicals. They are often used in combination with free radical scavengers (primary antioxidants) to achieve a synergistic inhibition effect.

The most common secondary antioxidants are trivalent phosphorus compounds (phosphites). They reduce hydroperoxides to the corresponding alcohols and are themselves transformed into phospates. The general mechanism of peroxide decomposition is shown below.